Showing posts from May, 2012
Show all

Can't Believe I'm Posting One Of These

- May 29, 2012
Questions about me: stolen from Amber over at Last Yesterday . Are you young at heart, or an old soul?  I've been told by multiple people, including the "psychic" who gave me a tarot card reading, that I'm on old soul.  What makes someone a best friend?  Staying your friend, even after all the craziness. What Christmas (or Hanukkah) present do you remember the most?  I have more birthday gifts that stick out in my mind, like my engagement ring and the book my grandpa's in (both give to me by J), but I was talking about my scooter that I got from Santa/Dad today, so we'll go with that. Tell me about a movie/song/tv show/play/book that has changed your life.  One Hundred Years of Solitude by Gabriel Garcia Marquez. I fell in love with his writing and it showed me a different way to look at life. Name one physical feature that you like about yourself, and one you dislike.   I love my calves. Odd, I know, but I like shorts and skirts that show them off. T
Post a Comment
Read more 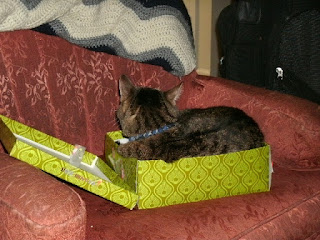 I set a shoe box on "Duke's chair" yesterday. By evening, he was in it. He's still in it now and he's been in it most of the day. He is very content to sit in his box all day. Really mom? You can stop now. Defending his box from Rembrandt
Post a Comment
Read more
- May 11, 2012 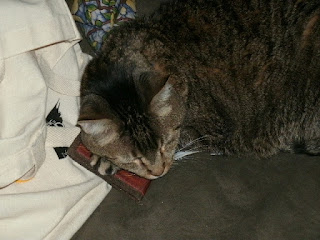 Duke decided to take a snuggle with my wallet.  This is Remy with Allie, one of our two guests for a couple weeks. He really wanted her to play. He even offered her his favorite chew toy (little white thing on the dog bed, not Allie).
Post a Comment
Read more

- May 11, 2012
Let's back track. I joined a weight loss challenge with my friends to keep myself motivated to lose weight. I had put 1 pound back on at our first weigh-in last week. This week I'm back down to 151. I did not eat very well this past week, but I also had that migraine (which I think I can officially say is gone now), and migraines do weird things to my body sometimes. I felt good enough to go for a run this morning.  begin: rant My 5k running track is awesome, and they even put doggy bag stations all around it. However, they don't do any good when only 2 or 3 have any baggies, and they are all at the end I begin at! Of course Rem had to stop and poop down at the other end, where the only baggies were across the street, and had been there so long they were starting to degrade in the freaking box! Ugh, I get all angry again just typing it.  /rant Anywho, I'm feeling pretty good. I didn't want cereal for breakfast, but had a larabar instead, which is ch
2 comments
Read more

An Ode To Prescription Drugs: Part 2

- May 09, 2012
Had my doctor's appointment. Let's start with this: I know I can request to change my PCM. But Tricare doesn't have to approve my request, and that won't save me when they randomly change it for their own reasons, which is what has happened so often the past couple years. I did look once for my fave doc's name, and it was not in the list of PCMs to choose from. So, I went to the current PCM. I'd only seen him once before. He did pretty good. He even looked in my eyes to see if there was pressure to be worried about. He offered me the option of going back on Verapamil or trying Topomax. I went with Verapamil since it worked well the first time I was on it. He also gave me a very strong aspirin to try. He was going to give me a shot to try to knock out the current migraine, but can't do that unless I have someone to drive me since we don't know if it will make me loopy or not. So I am taking a Verapamil once a day. It's actually a blood pressure m
1 comment
Read more

An Ode to Prescription Drugs

- May 07, 2012
Oh tramadol, my tramadol, You ease my pain, But you set sweet sleep Beyond my grasp And make me itch *le sigh* Ok, so it's not exactly an ode, but it's what I got at 0611 when the migraine didn't go away last night. I took tramadol when it started to hurt. I had taken ibuprofen and it apparently didn't keep the pain away. I waited about 5 hours to take a second tramadol, since it says to take 1-2 every 4-6 hours. Then I went to bed. I got this weird roaming itch. I think I've mentioned it before but don't feel like looking it up. I had trouble sleeping again as well. It wasn't as bad as last time, but I couldn't seem to just stay asleep. So I looked up side effects of tramadol. Mild itching is a common side effect, which explains the roaming itch. Dry mouth is another side effect, and yes I experience that. I just keep water by my bed. But this trouble sleeping isn't listed. I suppose it could just be the itching that's waking m
6 comments
Read more 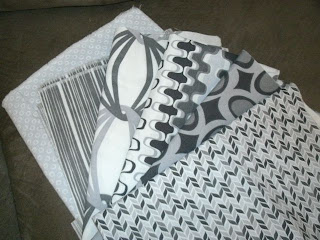 I saw these money envelopes online a while back and shared them with Jessica . I knew she was doing the envelope budget system, and sent her the link with an offer to make them for her (she doesn't sew). She asked me to make them, and I had her come over to pick out fabric from my small stash. She loved my gray prints, and had admired the brown. So I used the gray for the outside, and brown for the lining. So glad I found these online. Step one, cut fabric. Squares are 7 3/4 inches. Rotary cutter works best. the fabrics, cut into 7 3/4 in squares I was lucky and had some interfacing already. It just gives the envelope a little more hold so it's not floppy. Although I found the instructions for the interfacing didn't work as well as just following my instinct. I got the interfacing on. Then I sewed an outside to an inside with a gap and snipped the corners. The original blog pattern has more detailed instructions. Squares sewn together. The knitting nee
2 comments
Read more 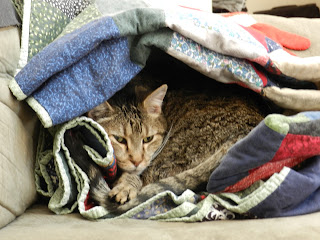 Meet Duke. He's 8ish years old. Rescued in 2005 from Lawrence, KS Humane Society. They found him as a stray, but already neutered and declawed in front. He is the epitome of a house cat. He won't even pee outside. And then came Rembrandt. He's 2. We adopted him in 2010 from Animal Rescue League of El Paso. His mother was found as a pregnant stray. Rem was born at the shelter. He's a goof ball.
Post a Comment
Read more

- May 03, 2012
So one of my friends started a weight loss challenge over at thintopia.com . I decided to join. Yeah, I only have like 3 pounds to lose to hit my goal. Ok maybe 2. But still, this challenge is going to go for 12 weeks, and it goes through our block leave. I must be crazy, right? Nope. I'm thinking this might help me stay a little more honest on my points tracking, and might help me survive block leave without adding weight. Give me a little moral support from some good friends. And maybe I can help them out as well. I know one of them doing it is also using WW online, so we can share when we find good foods that are low points. So, block leave. Let me 'splain. Block leave is when your unit takes a vacation. That is, everyone is allowed to take vacation, even if they don't have quite enough leave. Most units get block leave at Christmas and during the summer. Well this is our first time getting it in summer. J has always been in school or too busy training for them to t
1 comment
Read more

- May 02, 2012
I'm taking a mental health day today. Normally I would be at belly dance right now. Instead I'm still in my walking clothes from walking Rem this morning. I'm drinking a cup of coffee and contemplating whether or not I want to shower in the shower I cleaned this morning. And I just turned on the British Antiques Roadshow. Hell yeah. I do need to go to Costco and get more frontline for Rem. But that's all I really have to do today. I supposed I could take one of the critters to the vet since they are both due for checkups. Maybe Rem and I will do that this afternoon. Then I can take Duke tomorrow. I've noticed the past few weeks, that I seem to go brain dead come Wednesday. I do pretty good Monday and Tuesday, then my brain shuts off on Wednesday. I find myself skipping the lead at belly dance because I get stuck in a vortex so easily (that is, doing one move and wondering what to do next). So I'll go to Costco, and maybe the vet's. And I'll do som
Post a Comment
Read more
More posts