Showing posts from May, 2011
Show all

- May 31, 2011
This afternoon I came home from running errands all stressed out about Bark For Life. I saw lots of stuffing on the stairs, and wondered what toy Remy destroyed now. Then I walked in the living room. My polar bear was laying on Remy's bed. My stuffed polar bear that I've had longer than I can remember. My Jimmy bear. This bear went to college with me, moved around Lawrence with me, and moved to TX with me. I love this stuffed bear. Of course, when I saw my bear torn open with his innards spread around the house, I freaked. I yelled at the dog. I smacked his butt. I yelled some more. And I cried. Is that silly? This was seriously my favorite stuffed animal. I sobbed for a couple minutes. I picked up all the stuffing, and took the remains of Jimmy to the garbage. Rembrandt understood by this point that I was not happy and he was in trouble. So he went outside and wanted to stay outside. And here is where I made my mistake. I left him outside by himself and not on his teth
3 comments
Read more

- May 30, 2011
I need to mush these into one post. Item 1: Camping Didn't go so well. The river we were supposed to be on is completely dry. The nearby national forest is completely closed to the public. J was cranky. We ended up coming home a day early. But then we biked to the PX for lunch and a movie and had a decent day. Today we worked in the yard after a morning run and brunch. Item 2: Running After talking to J, I've decided to change my half marathon goal. He says your first half marathon is always the worst, and trying to do the TransMountain as my first is pretty much asking for hell on earth. However, he would like to run the  Duke City Marathon again. He ran it 2 years ago. And as with most marathons, they have a half marathon as well. Hell, Duke City has a half marathon walking category. It's October 23 in Albuquerque, NM. Don't know why it's called Duke City. Maybe it explains on the website somewhere. It benefits the New Mexico Cancer Center. So, new race t
Post a Comment
Read more

- May 30, 2011
Ok. This week we're discussing breakfast ideas. Let me first clarify that I was not a breakfast eater until J. He is a big breakfast guy. Can't live without it. Me, not so much. But living with him, I learned to eat breakfast. Most mornings, we do cereal. I don't drink milk, so I use vanilla flavored soy milk. I buy the light kind. J likes milk, but found we weren't using it up before it went bad, so he switched to coconut milk. Yes most mornings are cereal. J also taught me to mix different kinds of cereal. Like cornflakes (healthy) and frosted flakes (not so healthy). It makes the healthy cereals taste better, and you are satisfied with less of the unhealthy stuff. Sometimes we do mix it up. We'll do eggs and toast for an easy hot breakfast. Either fried eggs (using Pam) or scrambled with stuff in it. A little salsa mixed into scrambled eggs is a great way to add flavor. And we only buy whole grain bread. Been doing that for years now. In the summer, we so
1 comment
Read more 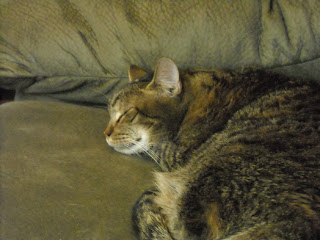 Duke is my cat. I have had Duke for 6 years this August. He is about 7 1/2 years old. He had a blood test on Tuesday. The results came back normal in all areas but one. Feline Leukemia. Back Story: When I adopted Duke in 2005, we didn't get to a doctor right away. When we did, she tested him for Feline Leukemia. There are 2 tests for this disease. The first test said positive. So they did another one. And another one. Wait 6 months and another. In the end, we were told that Duke might be a carrier. I now know that stage 1 of FeLV (Feline Leukemia Virus) can be suppressed by a healthy cat's immune system. Apparently, he is done suppressing it. We will be talking to the vet next week to get all the dirt on what happens next. Of course, you know I have been doing some research. So did my mom, as soon as I told her. These sites seem pretty good: http://www.vet.cornell.edu/fhc/brochures/felv.html http://www.petmd.com/cat/conditions/infectious-parasitic/c_ct_feline_leukem
Post a Comment
Read more

- May 23, 2011
Ok. Here's my Monday weight loss post. I may have done something similar before, but I will start with a brief history of my weight loss journey. I got serious about it when J was away at OCS. I joined SparkPeople and followed the rules and lost 20 pounds. Then we moved to El Paso and I kinda just stopped. It's much harder to follow when you're also cooking for/feeding someone who needs to eat more. Fortunately, it actually took a little less than 2 years to put that 20 pounds back on. But I did. So I tried starting over with Spark, and wasn't as strict. I went down to about 165, then back up to 170 over Easter. My ideal goal is 135, but even 145 would be totally awesome. Since Easter, I'm bouncing around in that 5 pound range. Which means I need to get serious again to get back on the losing train. I am giving myself a couple weeks, in which my stress levels will be higher. I know it will be easier for me to get back on track once Bark For Life is done. I plan
2 comments
Read more

- May 21, 2011
First campground was booked. Second one wasn't! They're pretty close, both on the river. Yay! Today we talked a little about staying home and working on the yard, but hell, this is probably our only chance to go camping this summer.Yay camping!!!
Post a Comment
Read more

- May 20, 2011
I love camping. Always have. As a kid, we went camping AT LEAST once a summer, usually more. I LOVED it! I mean really really loved it. I was so glad to learn that J loves camping, too. He is an Eagle Scout, after all. So we started camping together. My parents bought us a little Coleman tent. I was voting for a week of camping for our honeymoon, even. Later, (after getting married) they bought us new sleeping bags that zip together. Dad even gave us one of his old camp stoves. Now, last year, we didn't actually go camping. The year before, we only went once, and that was just one night. This year, we had to get out there. So we're planning on going next weekend. Memorial Day weekend. Sure, it will be busy, but J gets a 4-day. I'm trying to get a camp site reserved. Got their voicemail and left a message. Might have to wait till Monday. Anywho, the campground we chose also sells fishing licenses. And it's on a river. So we can fish! OMG! Our poles haven't been
Post a Comment
Read more

Why Do I Blog?

- May 19, 2011
My friend wrote a post that inspired me: Learning As We Go: Why we blog So why do I blog? I've been at this for a long time now, in a different format. It started with LiveJournal . At that time, it really was an online journal , not a blog. I had that for I don't even know how long. It has communities and you have a friends list. I loved it. Until there was trouble. I vented a little after my wedding and it lead to a big fight between siblings. Thankfully we got over it, but my LiveJournal never really did. It went friends only, and I wrote less and less. I wanted something more public. I decided I needed a change of scenery. So I tried blogger. It started with the bra blog. I still had my LJ at this time, but needed a public forum for the Bra Crusader . And blogger links with my google account. Win. Then came Tough Crackers . I was constantly ranting about the rampant stupidity surrounding me (especially commercials), and decided I needed an outlet (other than the hubs).
1 comment
Read more

- May 16, 2011
Been a while since I posted anything about running. Been so busy and not running as much. BUT... Yes, BUT, I have set myself somewhat of a goal. I want to run in this year's  TransMountain Challenge . It's a half marathon. It would be my first half marathon, BUT, if I can run this one, I can run many others. Why, you say? I'll tell you why. Because the TransMountain Challenge actually goes over TransMountain Road. It starts on one side of the mountain and ends on the other side. You run to the foot of the mountain, up over the mountain, and around at the other side for a bit before the finish. Last year I ran the 5K. It was my first 5K getting back into the running scene. J ran the half. So that leaves me 5 months. June, July, August, September, October. It's about 5 months to train up to it. Remember, I've done a few 10Ks, which are a quarter marathon, or half of a half. Confused yet? Me too. But that's because I've had a couple drinks tonight.
Post a Comment
Read more

- May 11, 2011
*I wrote this on my flight home and just now got around to posting it* So I went back to Kansas for Easter. I do this every year. When I was in college at St. Mary in Leavenworth, KS, Sister Anne Callahan was still working with the college music department. My sophomore year, she asked if I would be willing to do a duet with one of the sisters for their Good Friday service. I said yes. That was a hard start to what would become an annual date. It was April 13, 2001. Yes, a Friday the 13th. We didn't have classes (good Catholic college) and I sang with Sister Anita at the 2pm service. I had to work that evening at the sandwich shop. I was getting ready for work when Misty called me. Her step-sister, my friend, Breanna had shot herself. I remember her telling me, and the total shock that I was in. I remember going in the hallway and grabbing Lacey. I hugged her, told her Bre was dead, and started crying. I think I scared a friend or two. They hadn't ever seen me break down li
Post a Comment
Read more
More posts